On December 12th, 2011, the JC-COC’s Christmas Dinner was held at Royal Vancouver Yacht Club. We had a special performance by Miya Otake, a harpist who graduated from the Royal Academy of Music in London, England. The event attracted over 55 people include Consul General Hideki Ito &  Honourable Harry Bloy. 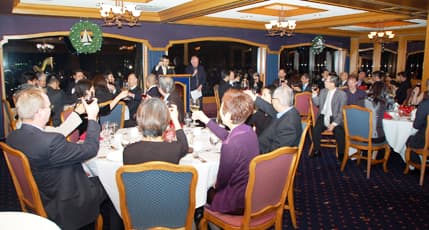 We would like to invite all members to our 8th Annual General Meeting and Networking Dinner to be held on Thursday, Augu...

On May 28, 2014,  BBOT’s High Tea Sushi networking event was held at the Nikkei National Museum and Cultural Centre in B...

On Tuesday, May 8th, The Japan-Canada Chamber of Commerce hosted a Spring Networking Night held at O'Doul's Restaurant &...

On June 27, 2011, we held a dinner with guest speaker Honourable Harry Bloy, Minister of Social Development and Minister...
Business Seminar: “Improving Company Profitability through the Promotion of Structural Reforms”
2011年度JC-COC主催クリスマス・パーティ
ホーム
Past Events