Hosted by Burnaby Board of Trade with support from The JC-COC
Pacific Western Brewing Co. Ltd. Sponsor

On February 22nd, the Premiers Luncheon on the Provincial Budget was held at the Burnaby Hilton.

This prestigious event, hosted by The Burnaby Board of Trade with support from The Japan-Canada Chamber of Commerce welcomed turn out of roughly 300 people varying from BBOT members, JC-COC members, members from the business community and members from other Japanese business association (such as Konwakai, Kiyuukai).

The Provincial Budget, which was released through the media earlier was outlined and commented on directly by our Premier, Gordon Campbell. Campbell’s thoughtful and entertaining speech provided the participants to understand the budget in a practical way through the premier’s eyes and vision for our province.

This years budget put emphasis on social services, the issues surrounding homelessness, areas relevant to economic and cultural relationships with Asia, support for the arts and health care. The budget calls for an increase in health care funding from 9.36 billion in 2001 to 14.84 billion in 2008 and 16.54 billion by 2010. The province also lowered income tax rates from 21.3% in 2002 to 14.1% in 2008 for the average British Columbian. The increased budgets in certain sectors and decrease in income taxes is balanced by the implementation of a new Carbon Tax. The Carbon Tax will be applied to industries and consumers that utilize Carbon Fuels, and will ultimately be passed on to consumers. The final result of the increase in funding, decrease in income tax and implementation will be measured on the effect is has on British Columbia in the upcoming year.

The Premier’s Luncheon proved to be an invaluable event for all participants. 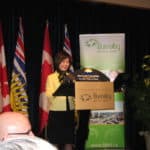 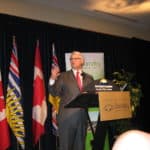 On May 28, 2014,  BBOT’s High Tea Sushi networking event was held at the Nikkei National Museum and Cultural Centre in B...